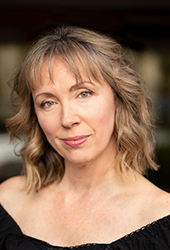 Ruth is an established performer both as an Actor (BA Theatre Nepean, Uni Western Sydney) and Puppeteer (Terrapin Puppet Theatre). As an emerging writer, she has drawn on her multitude of skills as a Drama tutor (Bachelor Teaching UWS), with a drama teaching career that spans more than 25 years, including writing and directing performances and facilitating devising theatre workshops in schools, corporate settings, universities, and youth theatre companies in: Canberra, regional Tasmania, Sydney and regional NSW.

Ruth’s play UNDER MY BED received an ArtsACT development grant during 2017 with supporting partners Ainslie and Gorman Arts Centres and Canberra Youth Theatre. Ruth was resident writer in The Street Theatre’s HIVE program 2015-2017 and a member of the EXPAND mentorship program 2015-2016, where she had previously developed the concept and work alongside Dramaturg Peter Matheson.

Ruth is a proud MEAA Actors Equity Ambassador, is on the board for The Canberra Theatre Centre’s Advisory committee, and is ‘Dr Whoops’ – a resident Clown Doctor at Canberra’s Hospital.