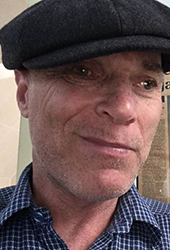 Tony Reck has worked in the vocations of literature and the performing arts since 1993. He has published fiction and non-fiction, and works as an actor, a playwright, a writer-director, a director, a producer, and a theatre critic. His first play, The Great Divide, a multimedia performance examining a family in crisis, was produced on two occasions: (Dancehouse, 2001, and Chapel Off Chapel, 2002). Since 2008, Tony has written, directed, and produced his own plays, culminating in The Antechamber, (La Mama/ Melb. Fringe, 2008), and three productions of the elaborate multimedia performance Dirty Pictures, (Collingwood Underground Theatre, 2010-12/ La Mama, 2016). In 2014, he directed David Mamet's American Buffalo and Harold Pinter's The Birthday Party; while between 2002 and 2014, he reviewed contemporary performance for Sydney arts magazine Real Time. Currently, Tony is writing preliminary scenes for a transmedia performance titled Blue Carla's Western Bonaventure and completing his novel True Crime. He holds a BA in Dramatic Art from the VCA and an M.A. in Media and Communications from Swinburne University. He lives in an inner-suburb of Melbourne, and enjoys reading, photography, cinema, nordic skiing, playing the harmonica, and participating in the local community. His artistic endeavours can be accessed on-line at www.tonyreck.com.