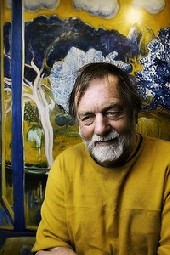 Barry Dickins was born in the Melbourne suburb of Reservoir. Leaving school early he worked in a factory and then as a set-painter for television. Through his association with La Mama Theatre, his first play, Ghosts, was performed in 1974. He has subsequently written a further nine plays. His play Remember Ronald Ryan won him the 1995 Victorian Premier's Literary Award. He has also written short stories, biography and other non-fiction and children's books.

In 2009, he published his memoirs Unparalleled Sorrow, which discusses his career and his battle with depression. 2015 will see the publication by Black Pepper of A Line Drawing of My Father, a memoir of the authors' father Len Dickins who served in the Second World War and was a commercial printer thereafter. It also gives a portrait of the working class northern suburbs of Melbourne.