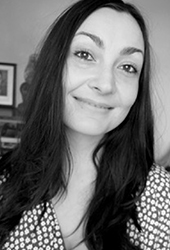 Maxine Mellor is an award-winning, Brisbane-based playwright of over twenty works. Awards include the Queensland Theatre’s Young Playwright’s Award (2001, 2002, 2003); the QTC George Landen Dann Award (2004); and a Matilda Award for best new independent work for Performance (2005) for Magda’s Fascination with Wax Cats. In 2012, she won Inscription’s Edward Albee Scholarship to undertake a residency in New York City, and the Queensland Premier’s Drama Award for Trollop. Maxine won the Max Afford Playwriting Award for 2014 for The Silver Alps, and in 2017, and received the Lord Mayor’s Young & Emerging Artists Fellowship to undertake professional development
through Singapore, Iceland and the UK.

Maxine’s work has been showcased at the National Play Festival twice, and throughout the USA as part of Inscription’s Playwriting and Screenwriting tour (2014). Recent productions include La Boite’s national tour of Maxine’s stage adaptation of The Wind in the Willows, Trollop at Queensland Theatre, The Wizard of Oz (in collaboration with The Danger Ensemble, Brisbane Festival and La Boite), and Anna Robi & The House of Dogs (Brisbane Festival’s Under the Radar). Her plays have been produced throughout Australia, and are published with Playlab Theatre and Australian Plays.

Maxine also regularly teaches and mentors emerging writers throughout schools and universities around Australia. She is a qualified drama and visual art teacher, and often works with gifted and talented students delivering workshops in various creative fields.