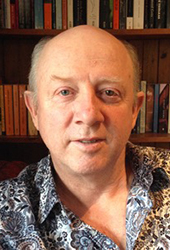 Born in Melbourne, Mark now lives in the Blue Mountains. After studying at the Victorian College of the Arts, and working for a number of years in the theatre where several plays were produced, Mark turned to fiction and poetry. A first collection of poems The Too Bright Sun was published in 1996. He has also published a novella Captain Cook (Pascoe, 1987), and the play Paterson’s Curse (Currency Press, 1988).
A second book of poems The Good Oil was published in 2000. A second novel Grassdogs was published in 2006 after winning the Harper Collins/Varuna manuscript prize. What Can Be Proven, a third collection of poems was published in 2007. In 2001 he was funded by the NSW Ministry for the Arts to write the play Eleanor & Eve, which premiered at Varuna in 2002, and was remounted at the Q Theatre in 2003. Mark’s novel The Last Days of Ava Langdon (UQP, 2016) was short- listed for both the Miles Franklin award and the Prime Minister’s Literary Award for Fiction and won the Voss Literary Prize, 2017.