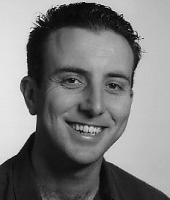 Damon is the Literary Manager for Black Swan State Theatre Conpany in Western Australia. Damon’s script Horsehead won Best Play at the inaugural Roma Fringe Festival 2012 in Italy and will be staged again by Cattive Compagnie in the New York Fringe 2013. Horsehead was nominated for Best Play at the 2008 Western Australian Equity Awards and for Blue Room Theatre’s Members Choice award where it was produced in 2008.

Damon's most recent work I (honestly) Love You was nominated for Best Play 2012 in the Western Australian Equity Awards and also for Judge's Choice and Member's Choice in The Blue Room Theatre Awards.

Damon has been writing professionally for over ten years and has had his work produced all across the country. He won the national Write Now! 2005 competition (NSW) for Best Script with his one man show Domestic Bliss and his script Pri-mates was selected for the Australian Script Centre Collection #6 publication. Nature as Explained by Theatre, for Longwood Productions, was chosen as the Play Of The Month, October 2007 for the Australian Script Centre.