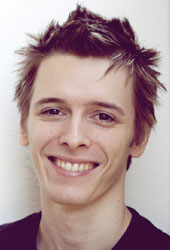 Richard Jordan is an award-winning Brisbane-based playwright, whose work has been performed in the UK, Australia, and the United States. His first play Into the Nile was shortlisted for the Queensland Theatre Company Young Playwrights Award in 2002. His second play like, dead was produced at the Judith Wright Centre for Contemporary Arts in 2005, and again by Vena Cava Theatre Company in 2009. He was a member of the prestigious Royal Court Theatre Young Writers Programme in London from 2007-08. His third play 25 Down won the 2008-09 Queensland Premier’s Drama Award, and was produced by Queensland Theatre Company as part of their 2009 season. His fourth play Machina premiered as part of La Boite Theatre Company’s Indie Season in 2014. Both 25 Down and Machina have been published by Playlab Press.

Richard is the recipient of two Matilda Awards (2010), a Marrickville Council Artist’s Residency (2011), and a MacDowell Colony Creative Fellowship, New Hampshire (2012/13). He is a full member of the Australian Writers’ Guild, and is currently completing a PhD in Creative Writing at the University of Queensland.