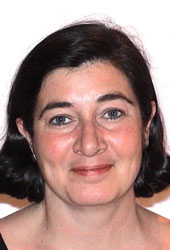 After graduating from the University of Heidelberg in Germany, Nadine Helmi was employed full time as assistant theatre director from 1983-1987 in the professional repertory theatre companies of Ulm and Kiel (Germany). Since 1987 she has been working as a director, both in Germany (all professional companies) and - after moving to Sydney - in Australia. Since 1993 she has also been working as a playwright and composer, specialising in writing plays and musicals for children. One of the highlights of her successful career as a playwright is the family musical 'Frau Holle' (publisher: Litag-Edition, Bremen, Germany) which since 1994 has had many productions in professional German theatre companies. 'The Secret of the Seven Marbles' has been a significant success in Australia, playing at a variety of venues in Sydney. Nadine Helmi has been a resident of Australia since 1988.