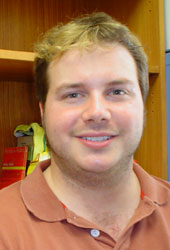 Leigh Oswin is currently studying for a masters degree in theatre at the University of Tasmania and is an avid writer of metatheatre. Through his masters project Leigh hopes to bring metatheatre into the 21st century. Leigh has worked in many aspects of theatre in Northern Tasmania, specialising in script writing, acting and lighting design. With his scripts Leigh likes to ask the question; Who is in control? He enjoys portraying power battles between characters and their author or audience.