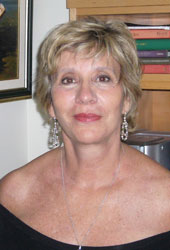 Julie Janson works as a playwright, screenwriter, producer, script editor and assessor in Sydney and internationally. She has received numerous grants and fellowships including an Australia Council Developing Writer’s Fellowship; an Australian Film, Television and Radio School Literature Board Attachment, and an Asialink Literature Residency in Indonesia. She is a long time elected member of the NSW Committee for the Australian Writers' Guild.

Julie's produced plays include ‘Gunjies’, about Aboriginal deaths in custody (Belvoir St Theatre) and ‘Black Mary’, about an Aboriginal bushranger (Company B Belvoir St, Festival of the Dreaming and Phoenix Theatre in Arizona USA). A long association with Asia has lead to the plays ‘Lotus War’ (Belvoir St Asian Festival, ABC Radio), ‘Season to Taste’, about food and sex (Belvoir St Asian Theatre Festival, ABC Radio), and ‘The Information’ about Aceh (Belvoir St B Sharp). She has written one play for children, ‘Kerah Putih’ (Jigsaw Theatre Company, tour of ACT and Victoria). She also wrote ‘Venus in Eritrea’, about Africa (Belvoir St Theatre Downstairs). Her most recent play ‘The Crocodile Hotel’ was workshopped in Makassar, Sulawesi, Indonesia, with assistance from Asialink.

Julie’s awards include a Highly Commended Human Rights Award for ‘Gunjies’ which was also nominated for an AWGIE. ‘The Crocodile Hotel’ was short-listed for the Patrick White Award. ‘Black Mary’ and ‘Gunjies’ have both been published by Aboriginal Studies Press and ‘The Crocodile Hotel’ has been published by Coastlines Magazine. Julie has had two short film scripts produced, ‘Ivan’ for the Australian Film, Television and Radio School, and ‘Get It On’ for the NSW Department of Education. Her current production is ‘Eyes of Marege’ for the Dreaming Festival in Woodford, Queensland 2007.