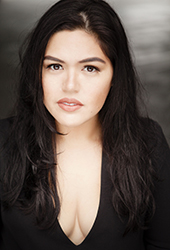 Nakkiah Lui is a writer/actor and Gamillaroi/Torres Strait Islander woman. She was a cowriter and star of ABC's Black Comedy. She has been an artist in residence at Griffin Theatre Company (2013) and was playwright in residence at Belvoir Theatre from 2012 - 2014. In 2012, Nakkiah was the first recipient of The Dreaming Award from The Aboriginal and Torres Strait Island Arts Board of the Australia Council. The same year, Nakkiah was also the inaugural recipient of the Balnaves Foundation Indigenous Playwright Award. In 2014, Nakkiah was the recipient of the Malcolm Robertson Prize and a Green Room Award for Best Independent Production. Most recently Nakkiah won the NSW Premier’s Literary Award 2018, Nick Enright Prize for Playwriting for Black is the New White. Nakkiah is also a young leader in the Australian Aboriginal community and has contributed to The Guardian and Junkee. She has appeared on Q&A and The Drum on ABC and is a regular guest and presenter on ABC Local Radio in Sydney. Nakkiah co-hosts the BuzzFeed podcast series, Pretty For An Aboriginal, with Miranda Tapsell. Most recently Nakkiah has appeared as a regular guest on Screen Time on ABC and her latest six-part comedy series, Kiki & Kitty, premiered on ABC Comedy in December 2017. Her novel Black is the New White was released in 2019.