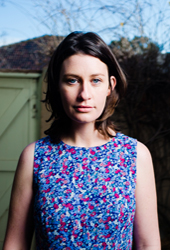 Sarah Hamilton is a Hobart based playwright, performer, and co-artistic director of Human Animal Exchange.

With Justine Campbell she has co-created A Donkey and a Parrot (Melbourne, Adelaide and Edinburgh Fringe Festivals) The Dust and Us (La Mama), Untold (MTC Cybec Electric) and They Saw a Thylacine. Thylacine won the Best Performance and Tiki Tour Ready awards at Melbourne Fringe in 2013 and was nominated for Best Theatre at Adelaide Fringe and three Greenroom Awards: Best Writing, Best Female Performers and Best Production. Following a collaboration with Malthouse Theatre, Thylacine toured nationally through Performing Lines and was nominated for a Helpmann Award for Best Regional Touring Production. Sarah was a participant in the inaugural Australian Contemporary Puppetry Residency at Terrapin Puppet Theatre in 2018, developing Infrared with Human Animal Exchange and Lemony S Puppet Theatre.

Her latest play The Split (produced by House of Sand) premiered in Adelaide at RUMPUS in 2019 before having a season in Sydney at Old 505.

Sarah studied acting at the University of Ballarat Arts Academy and has a Masters in Writing for Performance through the Victorian College of the Arts.