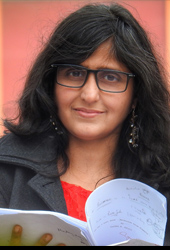 Rashma N. Kalsie is a published author and playwright based in Australia and India.

Rashma has studied Screenwriting from University of Toronto (School of Continuing Studies). Currently she is writing new plays using Natyashastra principles under the guidance of Dr. Bharat Gupt.