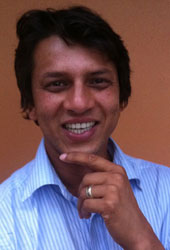 Christopher Raja migrated from Calcutta to Melbourne in 1986, and almost twenty years later he moved again, further inland, living and working in Alice Springs since 2004. Chris was co-guest consultant editor of Meanjin's Australasian issue in 2004 and since then has been a regular contributor to Meanjin, Quadrant, Southerly and Art Monthly Australia. His short story After the Wreck was adapted for radio and broadcast on ABC Radio National's Short Story Program in 2007. His play Drew's Seizure was performed at Araluen Arts Centre, Alice Springs in 2009. Chris worked as the NT Correspondent for Art Monthly Australia from 2010 to 2011 and he is currently a History and English teacher at St Philip's College, Alice Springs. He and his actor wife Natasha co-wrote The First Garden, with the assistance of a grant from Arts NT, which premiered in September 2011 and played over six nights at the Olive Pink Botanic Garden. Chris co-curated Art of the Nomads at the Chan Contemporary Art Space in Darwin in April 2012. He was selected for the Australian Society of Authors 2011/2012 mentorship program. His novel The Burning Elephant will be published by Giramondo in 2015.