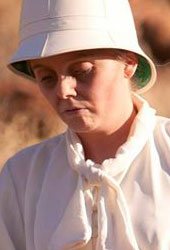 Natasha Raja was born in Port Adelaide in 1984 and began performing shortly thereafter. In 2000 Natasha moved to Alice Springs and continued to perform at local events. After matriculation, she spent five years looking after the elderly and disabled in town and on remote communities in the APY lands and Yuendumu. In 2007 the birth of her daughter Harper inspired Natasha to embark on a creative journey. She coordinated Alice Springs' first short play festival ‘Bite Sized Theatre' in which she also played Eric, a precocious embryo. Natasha has been the dulcet voice of Wearable Arts for the past four years. In 2010 she was Jill Tanner in the production Butterflies Are Free More recently she has encouraged her husband Chris to get involved in theatre and together, whilst waiting for the arrival of their daughter Jala, they wrote The First Garden.