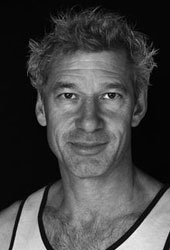 Born in Aberystwyth, Wales, of Greek and English parents, Tom spent two years working with renowned Dutch company KISS before returning to Australia to join Sidetrack Theatre as an ensemble member in 1985. In 1988, he played the lead male role in Jane Campion’s film Sweetie.

He was then acrobat/musician/performer with Circus Oz for three years and then actor/musician in two stage musicals, Buddy and Escape from the Forbidden Planet. He has performed with Melbourne Theatre Company, Arena Theatre, Griffin Theatre, Melbourne Workers Theatre, Back to Back Theatre and Kinetic Energy. In 1994, he was co-deviser/actor in the Burning House production of That Eye the Sky with Hugo Weaving and David Wenham, directed by Richard Roxburgh. In 1996, Tom joined Zeal Theatre, co-creating eight original productions with co-collaborator Stefo Nantsou, including
The Stones, Burnt and Taboo (which Tom has also directed for TheatreHaus in
Frankfurt, Germany, and Teater Grimsborken in Oslo, Norway).