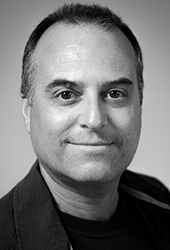 Michael is a writer, director, actor, dramaturg, acting coach, and is also the co-Artistic Director, with Helen Howard, of the acclaimed Matrix Theatre. Over the last 30 years Michael has worked on more than 100 professional stage productions in various capacities, and has appeared on screen in a variety of roles. He has been the recipient of numerous Queensland and national awards and nominations including a Green Room Award, Matilda Award and an AWGIE Nomination for his play A Beautiful Life, a Playlab Award for his outstanding contribution to Queensland writing, two APACA Drover’s Awards for his productions, eleven other Matilda Awards and a Helpmann Award Nomination.

Michael’s plays, which have often been co-written with his wife and creative partner, Helen Howard, have largely been inspired by true-life stories: an Iranian refugee escaping from the Khomeini regime in Iran (A Beautiful Life); A young woman’s encounter with her Latvian grandfather accused at Nuremberg for war crimes (The Drowning Bride); a woman’s odyssey through the Australian depression, WW2 and migrant boom of the early 50’s (The Wishing Well); as well as by classic works of world literature.

Michael’s published plays include: A Beautiful Life, The Drowning Bride, The Wishing Well (Currency Press); Citizen Jane, and The King and The Corpse! (Playlab). Michael has also written 1347, Cutting Loose and Haneef for Matrix Theatre; The Blood Votes for the QSE/Anzac Centenary Foundation; adaptations of Treasure Island (Matrix/QTC) and 1001 Nights (ZenZenZo/QTC/QMF), which won a Matilda Award for best new Australian work; and The Bush Genie (co-written with John Eastman) for Krakajak Theatre Company and QAC.