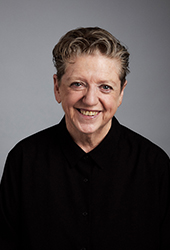 Robyn Archer AO FAHA is a singer, writer, artistic director and public advocate for the arts. A multi-award-winner, she currently performs recitals of French, German and American song, in 2017 wrote and directed The Sound of Falling Stars, and in 2019 released her Classic Cabaret Rarities and premiered Picaresque, an exhibition with performances for the Adelaide Festival, and Fortunes of Exile with the Adelaide Symphony Orchestra.

Robyn is recognised internationally for her expertise in the repertoire of the Weimar Republic and for many devised stage successes such as A Star is Torn and The Pack of Women. She has written plays including Il Magnifico, Poor Joanna (with poet Judith Rodriguez), and Architektin, and plays with music including Songs From Sideshow Alley and Café Fledermaus. Robyn has recorded eleven albums including Robyn Archer Sings Brecht (recorded at Abbey Road with The London Sinfonietta).

She is known worldwide for wider contributions to the arts including Artistic Direction of major arts festivals, cultural advisor and mentoring roles, and writings on the arts (selected in Detritus UWA Press) For more go to www.robynarcher.com