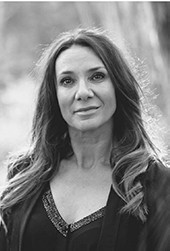 Tammy Lee Rock, a Proud Pakana Women, is an award winning director and storyteller. She is currently in production with her third film, Everything, which will complete her Master’s in Film and Television at VCA. This is the final chapter of a trilogy that includes Beautiful Mess (2018) and Herstory (2018).

In her past life as Tammy Anderson, she has been an award winning actor, playwright and director. She has played on stages such as Sydney Opera House, Theatre Royal Hobart, Malthouse Theatre, Melbourne Theatre Company, and Belvoir St Theatre. She was an original cast member of Jane Harrison's highly acclaimed play Stolen, which Tammy toured nationally and internationally for 5 years with. Her film credits include Boxing Day (Kriv Stenders, 2005) and The Sapphires (Wayne Blair, 2012). She has a Master’s already in Writing for Performance (VCA, 2014), a Graduate Diploma in Indigenous Performing Arts (1998, Swinburne University) and won a scholarship position at The John Bolton Theatre School (1999) where she studied Le Coq.

Tammy’s signature work, I Don’t Wanna Play House is a one woman show that explores and documents the human condition focusing on deeper issues of poverty, racism, physical and emotional violence, child abuse, displacement and trauma. It is the longest running show in Australia, presenting on many platforms, including national and international festivals, as well as in Indigenous and non-indigenous communities, Detention Centres, and Men and Woman’s Prisons. She is the first artist in Australian history to present at the Judicial College, where she has been training magistrates for the past 8 years. It is used as a healing tool to open up discussion to help victims of domestic, family and community violence. From this work she has held various posts, including Ambassador for Cancer Council Victoria, regarding Aboriginal Women’s Health, a member of The Victim Survivor Advisory Committee for the Victorian Government working on the current anti-violence campaign, as well as assisting in Aboriginal Affairs.

Her biggest credits to date are her 3 beautiful children, Jackson, Darcy Lee and Tadhg.