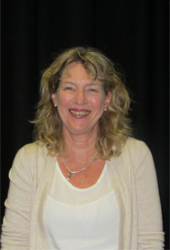 Robyn Bishop has written three plays all of which have been performed at The Carlton Courthouse in Melbourne under the umbrella of La Mama. The plays have been inspired by real life stories. One of these plays, Only the End, was selected for the V.C.E. (Victorian Certificate of Education) Drama List to be studied by Year 11 and 12 students. Only the End was published by Currency Press in 2005. The Devil in Me, was performed in 2007 and The Show Must Go On, was performed in 2009.

The Show Must Go On is inspired by Jan Russ’ life. Jan was casting director of the TV show Neighbours for 25 years. The play focuses on Jan’s teenage pregnancy and her lifelong quest to find her daughter adopted out on in harrowing circumstances in the 1960’s. In 2014 ABC TV made a two-part Australian Story, The Past is a Foreign Country, about Jan. As the playwright, who knew the story intimately, Robyn was asked to narrate and comment on parts of Jan’s journey.

Robyn’s first novel, The Girl in the Bath, was published by Balboa Press in 2014. She is currently working on her second novel Red Earth.

She is a Performing Arts teacher at Strathmore Secondary College, where she has directed numerous plays, developed scripts and performances with teenagers and initiated student trips to New York and LA to study theatre and film.