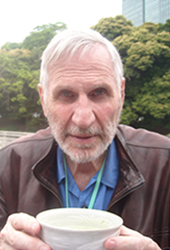 Ron Blair was born in Sydney in 1942 and educated at the Christian Brothers High School Lewisham. He is an Arts graduate of Sydney University.

Ron was closely involved with the early development of the Sydney’s Nimrod Theatre. For that theatre he wrote FLASH JIM VAUX and PRESIDENT WILSON IN PARIS. In 1975 Ron wrote THE CHRISTIAN BROTHERS, which toured Australia and New Zealand and played at London’s Riverside Studios. It has been continuously performed throughout Australasia over the past thirty years including a recent revival for Sydney Theatre Company which toured nationally.

MAD, BAD & DANGEROUS TO KNOW, a view of Lord Byron based on his letters written for John Bell, was premiered at the Adelaide Festival. He worked as a director with the South Australian Theatre Company which first produced two of his plays MARX and LAST DAY IN WOOLLOOMOOLOO.

Ron was an Executive Producer of ABC Radio Drama and for seven years he was Head of the Scriptwriting Department at the Australian Film Television and Radio School. ABC Radio commissioned and broadcast a new play, ROSHEEN BURNS. Ron also spent two years working with writers inAdelaide at the South Australian Film Corporation.

From 2002 – 2005, Bell Shakespeare toured Ron Blair and Nick Enright’s adaptation of Goldini’s A SERVANT OF TWO MASTERS. This production toured Australian cities and regional centres with great success. The West Australian newspaper noted ‘This is the kind of play that will reconfirm the notion that the theatre is a place for cleansing laughter, expressive displays of human ingenuity and the celebration of exaggeration’.