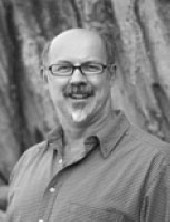 Paul Brown trained as a geologist in Sydney, and of all things is an expert on ocean floor rocks at Gundagai! In 1981 he founded one of Australia's foremost community theatre companies, Death Defying Theatre, which is now Urban Theatre Projects. He now combines creative arts with an academic career.

In 1985 he turned to writing, with Coal Town, a play about social and political struggle in mining towns, designed for performance on a football field.

He has since worked as a freelance playwright, often in community contexts, and on drama and documentary films as writer, producer and songwriter.

His community plays include Kahkwa Hakawati, made with Sydney's Arab-Australian community about the Gulf War; the riverbank extravaganza Murray River Story; a verbatim play Half a Life made with veterans of atomic bomb tests, and Room 207 Nikola Tesla about a famous inventor.

His films include the screen version of Aftershocks, an episode for the ABC series Naked: Stories of Men, the documentary 60 Thousand Barrels and, as creative producer, two immersive digital projects for a large cylindrical arena Ngurini and Ten Minutes to Midnight.