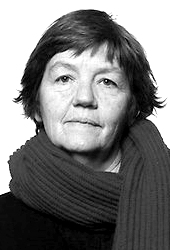 PATRICIA CORNELIUS is a founding member of Melbourne Workers Theatre. She’s a playwright, novelist and film writer. Patricia has a fierce commitment to class and her work often examines the lives of the marginalised. Her work also includes dramaturgy and mentorship with young or new playwrights. Cornelius is a recipient of numerous awards. She is the recent recipient of the Windham-Campbell Literature Prize and the 2019 Green Room Award for Life Achievement. She has written over 35 plays, including Shit, Big Heart, Savages, Do Not Go Gentle…, Slut, Love and The Call. Patricia co-wrote the feature film adaptation Blessed, based on the play Who’s Afraid of the Working Class? She is currently developing a feature film, Stolen, with director and co-writer, Catriona McKenzie. Patricia’s novel, My Sister Jill (Random House), was published in 2002. She is currently working on a major stage commission for the Melbourne Theatre Company.