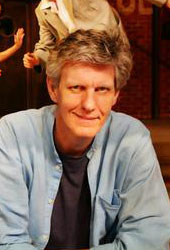 Paul Galloway is a Melbourne-based writer specialising in the arts. He has worked as a copy-writer, journalist, publicist, dramaturg and playwright. He currently writes and edits Melbourne Theatre Company publications. From 1995 to 2002, Galloway wrote a weekly theatre column for Brisbane News and was from 1997 to 1998 Brisbane theatre writer and reviewer for the Bulletin magazine. He has also written for the Courier Mail, the Australian and the Age. His play Great Leaders of the Twentieth Century won the 2001 QTC/Courier-Mail George Landan Dann Award and was subsequently presented in a rehearsed-reading at the 2001 Brisbane Writers’ Festival. In 2002 Brisbane’s Cathedrals Week presented his play for one actor and choir, Low Sunday, about the anti-Nazi theologian Dietrich Bonhoeffer. His play Realism won the 2007 Wal Cherry Award for Best New Play and was short-listed for the 2007 Patrick White Award. It has its world premiere in the Sumner at MTC Theatre 4 April –17 May, presented by Melbourne Theatre Company, directed by Peter Evans and with Miriam Margolyes as one of the cast.