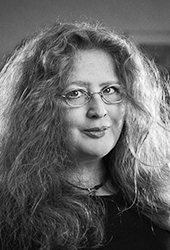 Jodi Gallagher’s plays include: Elegy (Playbox 2000, published Currency Press, New Work Grant Arts Victoria, Honourable Mention Victorian Premier’s Awards 2000), Victory Girls (LaMama 2000), Web (LaMama 1995, Junction Theatre/Theatre Praxis 1996), Banshee (LaMama 1996, reading Writers in the Raw Playbox 1995). Works read at Theatre in the Raw at Playbox include Palace Revolution (Playbox commission 2001) and Gathering, and The Method was given studio performances in the first season of Theatre in the Raw at Playbox in 1994. A libretto, Remembering Rosie, with music by David Hobson, was commissioned and performed by OzOpera as part of the Musica Viva season in 2001. Jodi holds an MA (Research) in Creative Writing from the University of Melbourne – the play, Gathering, received first class honours and also received a draft commission from Playbox.

Jodi has been commissioned by the MTC and was an affiliate writer with the company. Her plays have been nominated and shortlisted for a number of awards including the Wal Cherry Play of the Year and the ANPC’s New York Exchange. She has held an Eleanor Dark Fellowship at Varuna, and has published short stories and academic articles. Her work in progress, Prophet, is a winner of the R E Ross Trust Playwright’s Script Development Award for 2012. She has also worked in the commercial theatre for Bold Jack Pty Ltd as director/dramaturge on Eva: Tales from the Life of Eva Cassidy with Clare Bowditch. She is currently writing a book-length narrative which explores grief, memory, the death of her sister Vicki Reynolds, class, films including Jack Clayton’s The Innocents and Powell and Pressburger’s The Red Shoes, the photographs of Francesca Woodman and Claude Cahun, St Kilda, punk, heroin, and the experimental cinema of Maya Deren.
Jodi is currently working on several long form autofiction pieces, and a novella