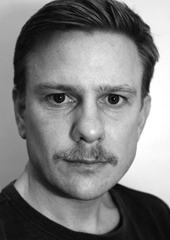 Tom Holloway is a multi-award-winning playwright whose work has been staged extensively both in Australia and around the world.

In 2016 his adaptation of Double Indemnity was produced by Melbourne Theatre Company. His plays include And No More Shall We Part (winner of the 2010 AWGIE Award for Best Stage Play and the 2010 Louis Esson Prize for Drama in the Victorian Premier’s Literary Awards, and produced at the 2016 Williamstown Theatre Festival, USA, staring Alfred Molina and Jane Kaczmarek), an adaptation of Storm-Boy (winner of the 2014 AWGIE for Young Audiences and produced by Barking Gecko and Sydney Theatre Company), Forget Me Not (produced by Bush Theatre, London in 2015, starring Eleanor Bron, and premiered at Belvoir Theatre in 2013), Beyond The Neck (2007 winner AWGIE Award for Best Stage Play), Red SkyMorning (2007, winner R. E. Ross Trust Development Award, 2009 Green Room Award Best New Writing for the Australian Stage), Love Me Tender (nominated for the Western Australia Premier’s Book Awards and the 2011 AWGIE Award for Best Stage Play), and many more.

His plays have been seen across the UK, the USA, in Denmark, Germany, Jordon, South Africa, New Zealand and more.

He was librettist for Czech composer Miroslav Srnka’s opera, South Pole that premiered at the Bavarian State Opera, Munich, in 2016, staring Thomas Hampson and Rolando Villaizon, as well as Make No Noise – an adaptation of the film The Secret Life of Words, produced by the 2016 Bregenz Festival, and premiered at the Bavarian State Opera for the 2011 Munich Opera Festival.