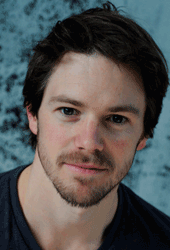 IAN MEADOWS studied as an actor at the Western Australian Academy of Performing Arts, graduating in 2005. Prior to this he studied Creative Writing and Performance at Curtin University in Western Australia. Ian has been seen on television in East West 101, Rush, Underbelly and Paper Giants: The Birth of Cleo. He has written for both seasons of Spirited and Offspring and has written award-winning screenplays for short films. He is currently developing two drama series with Southern Star.