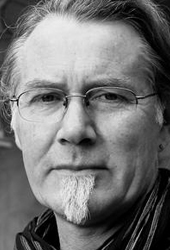 Daniel Keene has won the Victorian Premier’s Literary Award for Drama twice, the NSW Premier’s Literary Award for Drama three times, the Adelaide Festival Award for Literature, the Queensland Premier’s Literary Award, the Sydney Myer Performing Arts Award and the Kenneth Myer Medallion for the Performing Arts. His work has been presented at the Melbourne, Sydney and Adelaide International Arts Festivals and at the Melbourne Theatre Company and the Sydney Theatre Company. Since 2000 over 80 productions of his work have been presented in Europe, predominantly in France. In 2016 Daniel was appointed to the rank of Chevalier de I’Ordre des Arts et des Lettres by the French Ministry of Culture for his contribution to French Culture.