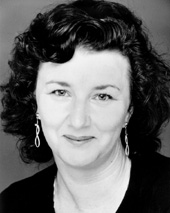 Debra Oswald is a writer for stage, film, television and children’s fiction.

Debra’s stage plays have been produced around Australia. Gary’s House, Sweet Road and The Peach Season were all shortlisted for the NSW Premier’s Literary Award. Her play Dags has had many Australian productions and has been published and performed in Britain and the United States. Gary’s House has been on the senior high school syllabus and been performed in translation in both Denmark and Japan. The Peach Season won the 2005 Seaborn Playwright’s Prize. Mr Bailey’s Minder broke the Griffin Theatre’s box office record in 2004, toured nationally in 2006 and was produced in Philadelphia in 2008.

Debra has written two plays for the Australian Theatre for Young People. Skate was performed in Sydney, on a NSW country tour and at the Belfast Theatre Festival. Stories in the Dark, which premiered at Riverside Theatre Parramatta in 2007, won the NSW Premier’s Literary Play Award in 2007.

She is the author of three ‘Aussie Bite’ books for kids, including Nathan and the Ice Rockets, and five novels for teenage readers: Me and Barry Terrific, The Return of the Baked Bean, The Fifth Quest, The Redback Leftovers and Getting Air.

Among Debra’s television credits are Bananas in Pyjamas , Sweet and Sour , Palace of Dreams , The Secret Life of Us and award-winning episodes of Police Rescue and she is the writer and creator of Offspring. Her script for the Offspring telemovie won the 2011 NSW Premier’s Award.