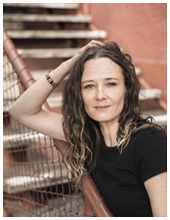 Peta Brady has performed in various TV shows such as ITS A DATE , KATH AND KIM, HOUSE HUSBANDS, JACK IRISH to name a few. In film she is remembered for her role in MULLET and PAWNO She has two yet to be released films called INCUBATOR and SOME HAPPY DAY coming out soon. She can also be remembered for her regular role as Cody in Neighbours.

Theatre highlights include: Love by Patricia Cornelius for which she received a 2005 Green Room Award (Gerda Nicholson award for best emerging actor) and Save For Crying by Angus Cerini nominated for a 2011 Green Room Award for Best Actress in Independent Theatre.

Peta wrote and performed in Strands and Status Update (nominated Green Room Awards for Best Ensemble , Best Female Actor and Best New Writing in Independent Theatre). She also wrote and performed in Ugly Mugs for Malthouse and Griffin and was nominated twice for Best Actor and Best New Writing at the 2015 greenroom awards. She has been performing Patricia Cornelius's award winning play Shit soon to be in its fourth season and also received the 2016 Greenroom award for Best Ensemble award for this work. She will be seen next in the MTC adaptation of 'the house of alba' by Patricia Cornelius.