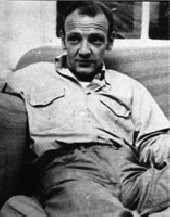 Jim McNeil died in 1982 after a literary career which lasted only a decade in a tearaway life spent mostly in prison. In 1970, while serving a 17-year sentence, he began to write plays about the life 'inside', his first work being The Chocolate Frog. The Last Cuppa, later retitled The Old Familiar Juice, followed in 1972. After they were performed in prison, both plays were introduced into the professional theatre in Sydney. Perhaps as a result of the press attention they received, McNeil was moved to a jail at Bathurst where he wrote his major work, How Does Your Garden Grow. His growing reputation as a playwright led to a campaign in support of his parole, and in October 1974 he was released after serving seven years. The premiere of How Does Your Garden Grow was in rehearsal by the Nimrod Theatre Company and McNeil had a grant from the Australia Council. McNeil completed his last play, Jack, in 1977. Though he was almost devoid of formal education, McNeil was a voracious reader from childhood. He was ignorant of the theatre, but he found it an ideal platform for his message that prisoners are ordinary people trapped by an outdated social system.