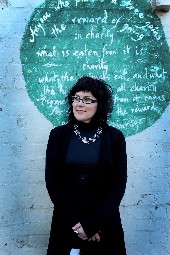 In 2015, Head Full of Love, directed by Wesley Enoch, will tour nationally from June to October. Barefoot Divas, a cross-cultural mix of spoken-word poetry and music, which Alana wrote and directed, played the Hong Kong International Festival in March and sold out the 2000 seat Hong Kong Concert Hall. Cold Light, adapted from the novel by Frank Moorehouse and commissioned by the Street Theatre in Canberra will be produced there in October 2015. Two works for radio broadcast written and directed for radio by Alana were broadcast on ABC Radio’s Earshot program.

In 2014 Alana Valentine worked as dramaturg on Stephen Page and Bangarra’s Patyegarang, won an AWGIE Award for Community/Youth Theatre writing for Comin’ Home Soon and won the BBC International Radio Writing Competition (1000 entries from 86 countries) for The Ravens. In 2013, Alana won three AWGIE Awards, including the Major AWGIE, the inaugural David Wiliamson Prize and the Youth and Community Theatre AWGIE for Grounded. She was also nominated for Head Full of Love for Radio Adaptation. In November 2014, a play she co-wrote with Dharug Elder Aunty Rhonda Grovenor-Dixon, about her father Aboriginal activist Chicka Dixon, was performed by Rhonda and her daughter Nadeena and opened at the Performance Space, Carriageworks in Sydney.

In 2012 she won the 5th STAGE International Playwriting Award for Ear to the Edge of Time. This prestigious award is given to a play about science or technology and attracted over 200 entries from 19 countries. In 2012 the judges were Pulitzer Prize-winning playwrights Tony Kushner, David Lindsay-Abaire and Donald Margulies, and Nobel Laureates Robert C. Richardson, Frank Wilczek and David J. Wineland.

Her plays Parramatta Girls and Shafana and Aunt Sarrinah are both on the NSW Schools Syllabus in Drama and English respectively. Her website is www.alanavalentine.com