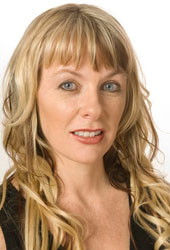 Lynne Bradley has worked as a director, choreographer, performer and actor-trainer in Brisbane and abroad for the past 25 years. In 1992 she founded Zen Zen Zo Physical Theatre with Simon Woods, and has spent the past two decades building Zen Zen Zo into an internationally renowned performance and training centre. Lynne has been involved in two major intercultural exchanges over the past ten years with world-renowned Butoh company Dairakudakan in Japan, and the International Schools in Hong Kong. She travels regularly nationally and internationally to direct and teach. Lynne has won a number of awards as a director, performer and choreographer, including Matilda Awards for Cabaret (Best Musical) and The Tempest (Best Independent Production). Zeitgeist was also short-listed for a prestigious Total Theatre Award at the Edinburgh Fringe in 2009.

Lynne is also an actor-trainer specialising in movement and physical theatre, and has founded all of Zen Zen Zo’s flagship training programs, including Stomping Ground and the Company Internship. Her training includes the Suzuki Method, Noh, Nihon Buyo and Butoh, which she studied intensively whilst living in Japan from 1989-1995, and again in 1999 (whilst on a Fellowship from the Brisbane City Council). In 1998 she received an Arts QLD professional development grant to study the Viewpoints with Anne Bogart and the SITI Company in New York, and she and Simon Woods subsequently became the first teachers of this actor-training method in Australia. Lynne is currently completing her PhD in the area of Intercultural Theatre Practice, and works regularly in Australian universities and Acting Schools around the country.