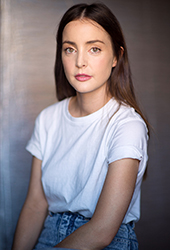 ADRIANE DAFF is an actor, writer and theatre maker. She is one of the founding artists of The Last Great Hunt. Some theatre-making credits for TLGH include Lé Nør [the rain] (nominated for two Helpmann awards), The Irresistible (a co-production with Side Pony Productions also nominated for a Helpmann award), Falling Through Clouds, All That Glitters and Elephents. For Black Swan State Theatre Company XENIDES, A Perfect Specimen, Blithe Spirit, Flood, The Importance of Being Earnest, Arcadia, A Midsummer Night’s Dream and The Visit. On screen Adriane has appeared in The Big Spaghetti, Three Summers, Small Town Hackers, DAFUQ? and Otherlife. In 2018 Adriane won a PAWA for Best Actress for The Irresistible and Best Actress in the ‘Next Gen Webfest’ for The Big Spaghetti, a web series she also co-wrote.