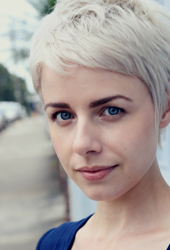 A graduate of The Actor's College of Theatre and Television, Tara is an actor, playwright, director and producer.

In 2010 she co-wrote (with Oleg Pupovac) and performed in "In Stereo" at The Old Fitz Theatre.

That same year she wrote and directed "Jennifer Forever", since published by Playlab Indie and described as a "...thought provoking piece of theatre, such a brave and bold accomplishment."*

In 2016 she co-wrote (Kieran Foster) and directed "Drift", performed at ATYP.

She is the Co-Artistic Director of independent theatre company Two Peas, www.thetwopeas.com

Her favourite plays include "After Miss Julie" by Marber and "Saved" by Bond.

Her dream role is to play Sylv in Berkoff’s "East".