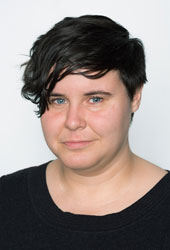 May Jasper has been involved with a number of projects at La Mama Theatre including Speaking, her first play to be produced by La Mama Theatre in 2009, and her latest play, not a very good story, which debuted at La Mama in 2012, with a return season in 2013. With Alia Vryens, Jasper has co-written and performed in May and Alia do Pirates! (of Penzance) which has had three Melbourne seasons (Revolt, The Butterfly Club and La Mama Courthouse) and has toured internationally in the US and Canada.

SNAFU Theatre: May Jasper and Sam Wilson founded SNAFU Theatre in 2002, collaborating to produce eight original theatre pieces, all directed by Wilson. Early productions include Love, Coincidence, Death’s Variety Hour, and Month of Sundays (all written by Jasper). In 2008 the company began experimenting with guided improvisation with actors, leading to the realistic dialogue and unconventional structure of shows like The Beginning of the End, Saturday Afternoon Soap Opera, and Ten Months in a Cold Town. Jasper and Wilson have also co-written two shows, The Dead Air and Murder at Warrabah House which had critically acclaimed seasons at Studio 246 in Melbourne, Edinburgh Fringe Festival in 2011, and at La Mama Courthouse in 2012.