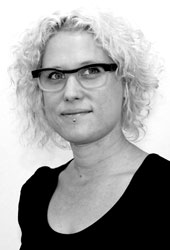 Sarah Hope is an emerging playwright and theatre maker who graduated from the University of Queensland in 2008. Sarah has experience in a variety of theatrical projects as a director, writer, producer and performer in Brisbane and Darwin. She co-wrote and directed The Keeper for Tin Can Theatre in 2009. In 2010 she worked with Arts Access Darwin and CemeNTworx Theatre to devise and direct Jules Hearts Romeo. After attending the Fresh Ink National Studio in 2010 her monologue, Elissa Louisa Smith Loves William Cornelius Bennett Forever was produced and published through ATYP.

Sarah wrote The Hoist as a JUMP Mentorship project with Stephen Carleton as her mentor. The Hoist went on to receive the NT Literary Award for Best Performance Script in 2013. Sarah’s second play Dog Dog was developed through the support of Corrugated Iron and the Brown’s Mart’s Build Up program in 2013. Dog Dog is set to tour schools with Corrugated Iron in urban and remote locations. Sarah is excited to have started a new work Coal Face after receiving her first commission through Brown’s Mart in 2014