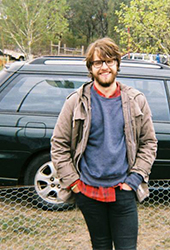 Mark Rogers is a playwright and theatre-maker living in the Illawarra. He has made critically acclaimed works with some of Australia's most innovative independent companies: Bodysnatchers, Applespiel, re:group and Woodcourt Art Theatre. His previous work as a writer includes: Tom William Mitchell (Merrigong Theatre Company), Plastic (Old 505 Theatre), Target Audience (Novelty UK), The Buck (Rock Surfers, Bondi Feast), Soothsayers (Brisbane Festival: Under The Radar), Blood Pressure (Rock Surfers, Old Fitzroy Theatre) and Gobbledygook (PACT, AC Arts Adelaide). His play Blood Pressure is published by PlayLab. He also makes work as a part of performance collective Applespiel and has been involved in all projects 2008-present, including seasons at major theatres nationally and internationally. He holds a PhD from the University of Wollongong, where he works as a Lecturer in theatre and performance. He is a proud member of the NTEU.