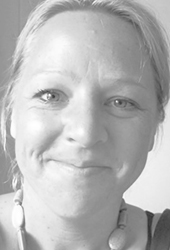 Based in the heart of the Daintree Rainforest, Amy is inspired by remote landscapes and the darker interactions of human nature. Amy initiated her playwriting career in 2004 through JUTE Theatre Company’s Enter Stage Write program and since then has developed a number of scripts for the stage.

In 2006 Amy was an online participant of the World Interplay festival for her work in development Where the Grass Grows. In 2008 Amy developed a short work in collaboration with playwrights from Tasmania, Cairns and Darwin. The culmination Dancing Back Home was co-produced by JUTE Theatre Company and Mudlark Theatre (TAS) and had a season in Cairns & Tasmania in 2010.

Delirium, a collection of six short pieces was produced by JUTE Theatre Company in 2014. Amy’s latest work in development, The Keepers, was shortlisted for the Playwriting Australia’s National Script workshops in 2014.