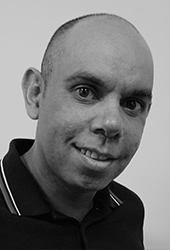 Steven Oliver is a descendant of the Kukuyalanji, Waanyi, Gangalidda, Woppaburra, Bundjalung and Biripi peoples. He studied at the Aboriginal Music Theatre Training Programme in Perth and from there was accepted into the Music Theatre Programme at the West Australian Academy of Performing Arts (WAAPA).

Upon his return to Queensland he took on the role of Assistant Artistic Director with the Aboriginal Centre for the Performing Arts in Brisbane. He has worked with companies such as Yirra Yaakin Noongar Theatre, Kooemba Jdarra Theatre, La Boite Theatre, JUTE Theatre Company, Kite Theatre and the Queensland Arts Council.

He has had showings of his musical Black Queen Black King as part of Queensland Theatre Company’s Creative Development Series in Association with Playlab and also at the Brisbane Powerhouse for their World Theatre Festival Program. He has also been a Queensland state finalist twice in Brisbane and national finalist for the Australian Poetry Slam at the Sydney Opera House. He has also had his play Proppa Solid (originally Proper Solid) produced by JUTE Theatre Company in 2014 that will tour Queensland in 2016 and will also be published by Playlab. He is also a writer, actor and associate producer for ABC’s Logie nominated sketch show Black Comedy and has just finished filming season 2 to air in 2016.