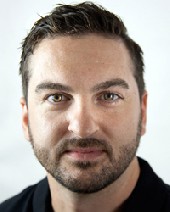 Hayden is a performer and contemporary performance maker, working across a range of forms including theatre, installation, immersive experiences, site-specific performance and experimental collaborations. He has worked as an Actor, Director, Writer, Producer and workshop facilitator.

Hayden co-founded multi award-winning company Shock Therapy Productions in 2015 and they since have staged original and existing works at various venues and festivals nationally and internationally, and have also had their work translated and produced internationally.

Hayden has created and worked on a number of Site-Specific performance projects including co-writing, co-directing, co-producing and performing in Welcome to Sameville, a large scale immersive outdoor work as part of Festival 2018, for the Gold Coast Commonwealth Games.

Hayden also has an extensive background working in Youth Theatre and Theatre in Education, writing and directing shows for youth, and touring nation-wide performing and teaching workshops on a range of theatrical styles with students of all ages. He Co-Directed Flood for the Arts Centre Gold Coast Youth Theatre Project and has also toured to remote communities with the world’s first Forum Theatre show for children, Fair Play. Hayden is a graduate of Griffith University where he studied Theatre and Writing.