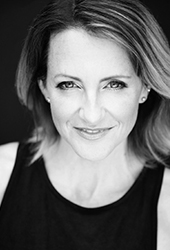 Caroline is a director, deviser and performer and the Co-Artistic Director of Belloo Creative. Over the past 20 years she has worked as an actor, director, theatre maker and educator both as a freelance and ensemble-based practitioner. She has acted with a range of theatre companies nationally and has extensive screen experience having appeared on Australian and British television. Holding a repertoire of original theatre works dedicated to
developing innovative performance, recent years have seen Caroline embark on interdisciplinary projects as actor, deviser and director with independent makers and major organisations across varied mediums including contemporary
performance, drama, cabaret, comedy and opera.

Caroline was on the board of Queensland Theatre from 2003 to 2006, has taught at universities and institutions nationally (most recently in the QUT acting program) and specialised in avant-garde theatre and the Suzuki Actor Training Methodology for 15 years both in Australia and Japan as a senior company member with Brisbane based Frank Theatre.

2016 saw Caroline premiere HANAKO for the Brisbane Festival with Belloo Creative, at the Brisbane Powerhouse. She co-created, directed and performed in the five times nominated bilingual production. In the same year she received a best director nomination for Motherland (also with Belloo Creative), which completed a national touring circuit co-produced with Critical Stages. Caroline recently featured in the new Australian film Australia Day directed by Kriv Stenders, worked as assistant director on Queensland Theatre’s Noises Off and joined seasons with The Danger Ensemble and The Good Room for the Brisbane Festival 2017.

In 2018, Caroline is working with Australia’s leading regional arts organisation NORPA as an associate artist and developing new work in contemporary and dance theatre for 2018 and 2019.