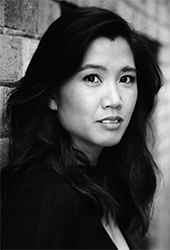 As a playwright, she was a participant in the Lotus Program by Playwriting Australia and Contemporary Asian Australian Performance (2014-2019) and was also an Artist-in-Residence at La Boite Theatre Company (2016 and 2018), where she worked on her first play, My Father who slept in a Zoo. Ngoc was also one of the writers on the web-series Un-Australian (2017, Essential Media, Writing Dir: Roger Monk).