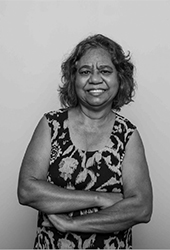 Henrietta Marrie (Masters in Environmental and Local Government Law; Dip. T; Grad. Dip. of Arts [Indigenous Studies]) is an Elder of the Gimuy Walubara clan of the Yidinji people and Traditional Owner of the land on which the City of Cairns and southern suburbs are now located. Henrietta has wide experience in Indigenous cultural and natural resource management and impact assessment, intellectual and cultural property law, heritage legislation and philanthropy. As an academic, she hashad over fifty papers published in books and journals. She served six years with the UN Secretariat of the Convention on Biological Diversity in Montreal, before becoming the Program Officer/Manager for North Australia with The Christensen Fund — a California-based private philanthropic fund — a position in which she served for nine years. She was also a Visiting Fellow with the United Nations University — Institute for the Advanced Study of Sustainability (based in Tokyo, which serves as a research institution and “think tank” for various UN agencies) working on the Institute’s Traditional Knowledge Initiative. Currently, Henrietta is Associate Professor (Indigenous Engagement) with Central Queensland University, working from the Cairns campus. She is also an Adjunct Professor of the Cairns Institute, James Cook University. She is a Co-Patron of the Cairns Indigenous Art Fair a position she shares with the Governor of Queensland. Henrietta was listed among the Westpac and Australian Financial Review 100 Women of Influence in 2014 for her work in public policy. On January 26th 2018, Henrietta was made a Member of the Order of Australia in the General Division, and on June 8th she was recognised as a Queensland Great. Subject of a stunning mural portrait by Claire Foxton on the southern wall of the Cairns Corporate Tower, Lake Street, Henrietta’s life and accomplishments have also been dramatised in the play Bukal produced by the JUTE Theatre Company in association with CQUniversity.