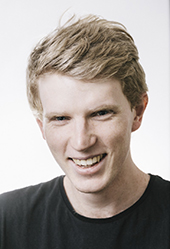 Alexander Bayliss is a playwright from Brisbane.

In 2019 his play Squad Goals was produced by Share House Theatre Company and was described as “an excellent example of a gripping thriller crossed with a comedic horror” (Stage Whispers). Currently Alexander is writing the book and co-writing lyrics for the musical On the Docks, which had a work-in-progress showing as part of the Griffith University Conservatorium of Music’s 2015 concert series. His play Formaldehyde was long-listed for the 2017/2018 Queensland Premier’s Drama Award, and was developed as part of Playlab’s Lab Rats program in 2014, and Queensland Theatre’s Playwrights Program in 2017.