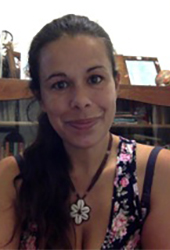 Kylie Coolwell started out as an actor after graduating from NIDA in Acting in 2007. She has acted in plays for Moogahlin Performing Arts Company, the Darlinghurst Theatre Company, The Dreaming Festival, the Newtown Theatre, Q Theatre in Penrith as well as appearing in the television series Redfern Now. In 2012 Kylie participated in the PWA, Redfern Salon for Indigenous Playwrights and started writing Battle of Waterloo her first attempt at writing a play. Battle of Waterloo was further developed by PWA and in 2014 The Sydney Theatre Company invited her to take part in their Rough Draft Program and public reading which resulted in the prestigious theatre company commissioning Battle
of Waterloo and producing it for its 2015 season.