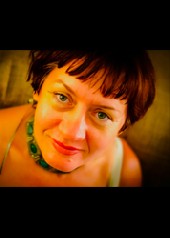 Sandra Thibodeaux is a playwright and poet. She has written over a dozen plays that have been staged as part of festivals across Australia and Indonesia, and broadcast on Radio
National. Her latest plays include The Age of Bones, A Smoke Social, Mr Takahashi (and other falling secrets) and The Lion Tamer. Sandra has twice won the NT Literary Awards for her plays, and has been short-listed for both the Patrick White and Griffin playwriting awards. The Age of Bones was nominated for a prestigious Green Room Award (Melbourne) for Best Ensemble, and is currently being adapted for the screen.

Sandra has collaborated with Indonesian writers and artists on literary and theatrical projects since 2003. Projects include Diburu Waktu (Time is a Hunter) (Darwin Festival), Katakan Padaku (Ubud Writers and Readers Festival) and Terra (a bilingual anthology of Austronesian poetry and prose).