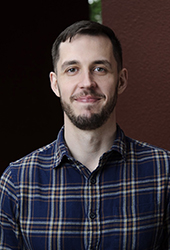 Daniel Lammin is a graduate of Directing at National Institute of Dramatic Art (NIDA), and the Bachelor of Performing Arts at Monash University. He received a Green Room nomination for directing (Independent Theatre) in 2014 for Master Class (Left Bauer Productions), and in 2011 was a recipient of the Besen Family Artist Program from Malthouse Theatre. His writing/directing credits include Awakening (MUST/ fortyfivedownstairs), Columbine (MUST) and The Cutting Boys (La Mama), and his other directing credits include Sneakyville (Before Shot), Strangers in Between (Cameron Lukey/Don’t Be Down Productions), Ryan (La Mama), and The Laramie Project (MUST). He was also assistant director on On the Misconception of Oedipus (Malthouse Theatre) and Endgame (Melbourne Theatre Company), and dramaturge on Gary Abraham’s production of Angels in America (Cameron Lukey/ Dirty Pretty Theatre).

Daniel was the Producer and Programmer for the Centre for Theatre and Performance at Monash University, during which time he produced a highly successful tour of student work to the Wuzhen Theatre Festival in China in 2019. He is also a film critic and writer for the Australian film website SWITCH, and host of the Disney history podcast Ink & Paint.