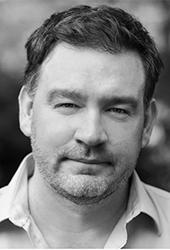 Robert Kronk was born in Bundaberg in 1977 and studied Drama at the Queensland University of Technology. He is the creative producer and CEO of Flipside Circus and is a co-founder and director of debase. He was director of programming and director of
operations at Metro Arts until 2008. He has worked extensively as a dramaturg,
writer and director for companies including; La Boite, Brisbane Festival, Queensland Theatre Company, HotHouseTheatre, and Queensland Performing Arts Centre.

In collaboration with Bridget Boyle and Liz Skitch, he has written The Loud Room (2002–04), Big Things (2007) and Popping Lead Balloons (2009). He coordinated The Tunnel — a Brisbane-based satirical writing team, and was head writer on The Tunnel’s Uncle Tony’s Oats (co-produced with Queensland
Theatre Company 2010) and Campbell’s Winter Soup (2011).