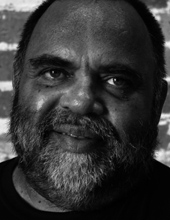 Sam Watson is of the Munnenjarl and Biri Gubba tribal nations and he has blood ties to the Jagara, Kalkadoon and Noonuccal peoples. As a student in the 1960s he was active in political campaigns against the Vietnam War, the White Australia policy and the Apartheid regime in South Africa. He worked with Elders in the 1970s to establish community organisations in the areas of health, housing, education, employment and legal aid.

Along with Denis Walker, Sam Watson launched the Brisbane Black Panther Party in 1971 and he also worked at the Aboriginal Tent Embassy in Canberra. In the 1980s he moved to Caboolture where he wrote his first published novel The Kadaitcha Sung. He won the National Indigenous Writer of the Year award in 1991.

Sam has since written for television, cinema and for the stage and teaches at the University of Queensland.